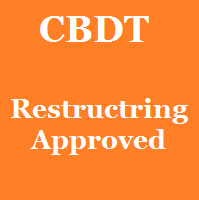 Meanwhile, there is another proposal for a cadre restructuring of Central Board of Excise & Customs (CBEC). This will add 20,000 officers to its existing workforce of 66,808 officers, taking it to 86,808, and this may give additional revenue of about Rs 68,000 crore.

The CBECâ€™s proposal may take a little longer as it is running behind CBDT proposal in terms of securing some key approvals. The proposal was recently approved by Chidambaram. It will now have to be cleared by the Department of Expenditure and then the Department of Personnel and finally the Cabinet.So, both the proposals would add to extra over Rs 93,000 crore a year to the government kitty. This means that each employee will add to Rs 2.28 crore a year to the government kitty on an average.

The additional revenue will be over and above the Budget Estimates of Rs 6,68,109 crore for direct taxes and Rs 5,65,002 crore for indirect taxes. However, the entire workforce may not be added within this financial year even if the proposals are cleared soon.The proposals were stuck for years and junior tax officers often threatened to go on strike for not getting promotion for years. As per government guidelines, cadre review should happen every five years, but the last cadre review of CBDT was in 2001-2002, while it happened a year later in CBEC.

For instance, in CBEC 16 new posts have been proposed at the apex level and these officers would be called Principal Chief Commissioner. Similarly 38 additional posts are proposed in the Higher Administrative Group Plus category which will include Chief Commissioners.

Due Date for Filing Tax Return Extended Again- a rumour ??