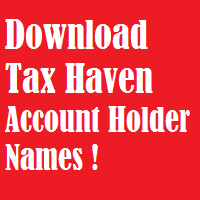 A list of 498 Indians are among the in a database of one lakh offshore entities in tax havens owned by various person of world have been released and is downloadable.The release of the information is from a  database  which is part of a cache of 2.5 million leaked offshore , currently in possession of  The International Consortium of Investigative Journalists (ICIJ) which is continuously investigating the accounts holders in various tax havens. As per the ICIJ , it has analyzed database with the help of with 112 journalists in 58 countries.

Due Date for Filing Tax Return Extended Again- a rumour ??